Cecily Brown: Rehearsal is the artist’s first solo museum exhibition dedicated to her drawings. Arranged thematically, the more than eighty small drawings, large-scale works, and sketchbooks on view foreground Brown’s iterative reworking of motifs from her wide-reaching arsenal of source material—prints by eighteenth-century draftsman William Hogarth, pages from animal clip-art books, and the cover of Jimi Hendrix’s 1968 album Electric Ladyland are just some of the images that Brown has rendered again and again in her own hand. These drawings are not studies for her paintings but rather a distinct form of aesthetic inquiry, one that isolates the investigatory impulse that grounds Brown’s art in general.

Where Brown’s canvases revel in the visceral immediacy of paint, her drawings offer fragmentary motifs that build upon and undo each other. Their logic productively relates to the concept of ‘rehearsal’—a term derived from the Old French rehercier that originally meant to go over something again with the aim of more fully understanding it. The notion that this repetitive action was geared toward a culminating performance was a later conceit that has obscured the original definition of the word as valuing inquiry in its own right.

Indeed, what we witness in Brown’s sketches is the artist’s desire to visualize and respond to the images that attract and confound her (Brown has said that learning to draw is teaching yourself how to see). Painstaking and obsessive in their efforts to work and rework either an entire scene or the slightest of gestures—a turn of a lion’s head here, the arch of a boy’s torso there—Brown’s drawings take the act of looking as their very subject.

Cecily Brown: Rehearsal was on view at MCA Santa Barbara from January 28 through June 3, 2018. 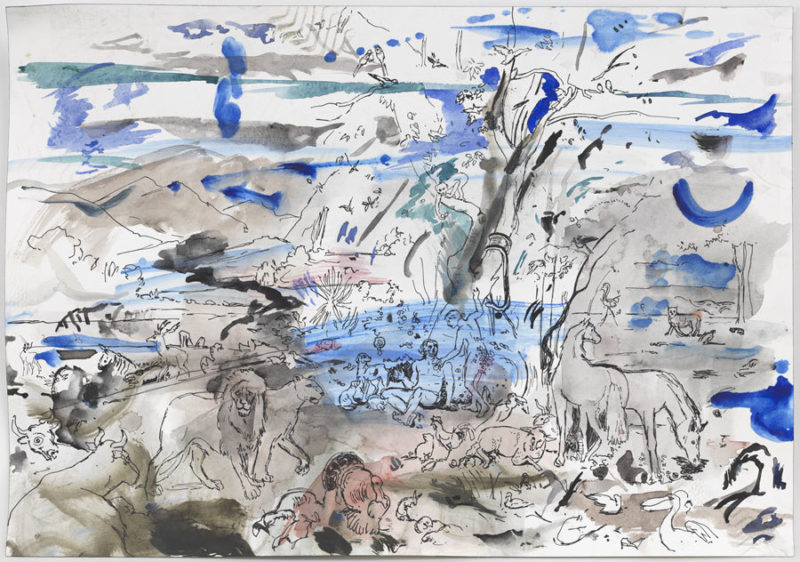 Cecily Brown: Rehearsal is made possible by support from the James Family Foundation, Nancy and Fred Poses, Jane and Ned Sadaka, and Marlies Verhoeven.

Special thanks to Thomas Dane Gallery.